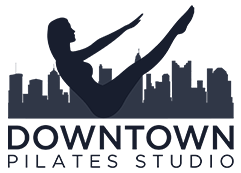 Developed by Joseph Pilates, this innovative method brings your body back to center and back to shape by building a strong core, increasing flexibility, and bringing awareness to your posture and core muscles. With hundreds of exercises performed on the reformer, cadillac, stability chair, barrel ladder, and mat, the Pilates method suits every body type and skill level, Pilates produces results your body can recognize keeping joints and ligaments healthy, revitalizing muscles and shaping a longer, leaner, and stronger physique.

Whether your an athlete or recently injured, practitioners of Pilates find power in its adaptability with a wide variety of exercises and modifications, Pilates lends itself to expansive goals, such as:

Downtown Pilates Studio is Old Town Scottsdale’s only full service personalized Pilates Studio. Our approach is simple, we offer classic and contemporary Pilates instruction in small groups and private sessions. The small groups consist of only 3 or 4 individuals, and our private sessions are in an exclusive setting, allowing for real privacy and an all apparatus service.

Albana is a native New Yorker, born and raised in NYC and has the energy and hustle that makes Downtown Pilates what it is today; a fun environment yet the feeling of a fitness sanctuary where you always walk out feeling taller, leaner, and more open!

Albana was a gymnast for 14 years growing up. She played major sports in high school such as softball, basketball, ran track, diving, and swimming as well and took it to another level when she passed the city physical and became a lifeguard in Brooklyn at the age of 16. She was an avid biker and rollerblader, zipping through the streets of NYC

She later followed a career in fashion after graduating from the infamous Fashion Institute of Technology with a BS in Marketing and later an MBA in Business from Parsons School of Design both in New York City. She worked herself up the ladder of success in fashion merchandising and traveled the world for some of the best design companies, allowing her to frequently visit multiple continents and countries and numerous cities such as London, Paris, Milan, Barcelona, Amsterdam, Hong Kong, Tokyo, New Delhi, Istanbul, and the list goes on.

Living her active lifestyle, while skiing in soaring slopes in Colorado, she was injured with a major tear in her knee’s ACL (anterior crucial ligament) and was told by doctors that her only option was surgery, however during rehabilitation and physical therapy is where she heard about Pilates. With a lot of hard work, she was able to recover! She continued to practice Pilates and grew to love it!

Her body began to change dramatically to a leaner, longer, much stronger body. She knew that she found something special tha she loved in Pilates so she decided to change her life and made it her livelihood. She left her career in fashion and enrolled the Kane School in New York City, where she completed all her certifications in mat pilates, all equipment, and an enhanced bridge program in rehabilitation, bio mechanics, and special populations. In 2013, Albana took another huge step, she left NYC and moved to sunny Scottsdale where she opened Downtown Pilates Studio.

If you have any feedback or questions do not hesitate to contact us.

Please complete the form fields below and hit the "Submit" button when you're done, we will get back to you shortly..